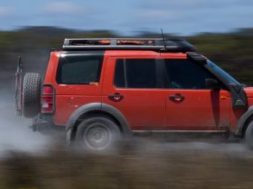 Air or coil suspension? Deciding which new vehicle to buy can be hard enough, and then you have to make a call on the fundamentals such as the engine and transmission before the detailed decisions like trim levels and options. Now there’s another decision to be made and that’s coil or height-adjustable air suspension, this time for the new Grand Cherokee although in the past Discovery 3 owners were faced with the same choice, as have been Touraeg and some Land Cruiser variant owners. That choice isn’t straightforwards as otherwise I wouldn’t be writing a blog post about it, so here’s the pros and cons, starting with the obvious.

Air suspension is going to cost you more and will be less reliable simply because it is more complex. But that’s not necessarily a lot more cash, and not necessarily unacceptably unreliable either, to put things in perspective. Put it this way, there have been many people happily driving around for a long time on air suspension, and many trucks use it, so it’s unlikely to leave you stranded every trip, and a much more probable risk is a puncture. A big part of the reliability is the design, and in the case of the Grand Cherokee Jeep have got it right with a protected air tank and closed-system design, more so than Land Rover with an open system and vulnerable air tank. Perhaps I can close the reliability question by saying I drive an air-suspended Discovery myself and take it just about anywhere when it’s not being a family daily driver, but if I spent my life travelling the Outback I’d choose something less sophisticated.

The next question is performance and convenience. The coil versions of air vehicles tend to have a factory ride height somewhere between the air version’s road and lower offroad height. This means they lack clearance in the rough, so offroading owners typically fit a small suspension lift to compensate. The availability of this lift may be a problem, given most buyers are likely to opt for the air version so the market is small. In the case of the Grand it’s a Jeep, so at least one of everything will be made so that’s not a concern.

The lift does mean that onroad performance is compromised relative to the air brethren but these modern vehicles handle pretty well, so even with a permanent lift you won’t be holding up traffic or losing out too much on the corners. However, you may have a harsher ride. This is because your lift will probably also be designed to take some weight without the back end sagging, so you’ll be running stiffer springs which don’t do anything for ride comfort. The air system on the other hand is self-levelling so can afford to run softer when it doesn’t need to, stiffening up as required when the load is increased.

The relative offroad performance is an interesting question, because both clearance and flex must be considered. With a coiler your clearance is fixed, but with air you typically have a couple more of modes that would take you above the coil height. Certainly you wouldn’t want to run a coiler at the maximum air height simply because the CV joints and suspension alignment aren’t designed for it, so as a general rule the air car will be able to temporarily dial in more clearance for than you’d have on a the coiler.

Flex is the next consideration. Some vehicles, notably Land Rovers, have a cross-linked air suspension system where as one spring compresses the air from that spring is fed to its opposite number so it is pushed downwards. These systems will beat a coil system for flex any day of the week. However, if there is no cross-link then as the ride height increases the flex decreases, so the coil may – but not necessarily – win on the flex front. Bear in mind that we’re considering a lifted and stiffer coil system as opposed to the standard, and that stiffness is not conducive to flex. Also, in the day of modern traction control systems flex is not as important as it used to be as a wheel lifting no longer means progress is halted. Therefore, all things considered, for a offroad performance air suspension is the better option.

Air suspension is also a convenience. Being able to drop the car 50mm or so below its normal ride height is great for carparks, and if the coiler is say +50mm above normal that’s a very significant 100mm difference. Our Discovery is air sprung and even with its relatively tall roofrack it can slide into many carparks, and that simply wouldn’t be an option if it was permanently driven in offroad height. The drop down can also be useful for sneaking under trees, and we have also used it in extreme circumstances to lower a Discovery’s centre of gravity when perched precariously on a hill. Lowering, or even raising the vehicle can make some loading situations easier too. It’s good to have the flexibility, and I’ve even lowered a vehicle so a lady in a tight skirt was able to enter with dignity.

A hybrid option is coil springs with airbags such as Polyairs.  These are bags that sit inside the coils and are inflated to assist with the load bearing, often when towing.  The advantage is that you can use less-stiff springs than you otherwise would need for towing, with the extra stiffness coming from the bag which is deflated when the vehicle is not loaded.  Reliability is not an issue as if the bag fails the car can still function, albeit with suspension not optimally set up.  However, bags-within-coils offer no height adjustment, self-levelling or flex improvement.  The inflation/deflation is done when the vehicle is stopped, not on the move.  My view is that these bags certainly have their place but are closer to a more versatile coil setup than a height-adjustable air suspension system.

So there you have it; air suspension wins onroad, offroad and is more convenient. The disadvantages are complexity with an associated risk of unreliability, and cost. If all you’re going to do with the car is drive it bitumen or gravel roads, not tow, not duck into low carparks and not carry much of a load then the advantages and flexibility of air suspension may well not be worth the extra cost. If you just want a bit of extra load carrying in the rear on occasion then coil airbags may be the way to go.

If on the other hand you are a touring offroader then it is likely you’ll find the benefits tend to well and truly outweigh the risks, especially if that same vehicle is used for a variety of purposes from family taxi to offroader adventurer. This is why very few Discovery 3s were sold with coil suspension and my prediction is the same will be true of the Grand Cherokee.

0
1   0
previous Should you lock your centre diff for offroading?
next So what is track damage, and how do we prevent it?