Home Blog How Not To Drive A Jetski, or I Should Have Learned By Now. 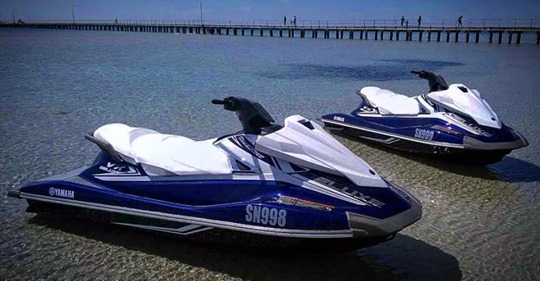 How Not To Drive A Jetski, or I Should Have Learned By Now. 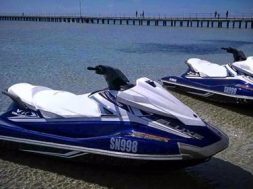 How Not To Drive A Jetski, or I Should Have Learned By Now.

If it goes fast and can be driven, I’m up for it.

And that’s how I found myself astride a three-seater jetski, with my 15yo daughter and a young feller sat behind. It was an ocean ride, so pretty choppy and I wouldn’t say the waves were big, but tall enough to get interesting as you could feel the ski get light over the top.

I had been cautious for at least the first half-minute or so, in keeping with my risk averse nature, not keeping the throttle open for more than a few seconds. Clearly, there was more to come from the engine so I opened her up a bit and then things really did start to get exciting. Definitely got a bit of air, and I learned to brace with my legs to absorb the landing impact. The sounds of the passengers indicated they were having fun too. Did you know “Dad” had seventeen “A”s in it? Well, now you do. Young feller was being manly and quiet, as they do.

Emboldened by my mad ski-skillz, I kept her flat chat and headed for bigger waves which promised more fun. It wasn’t long before a mighty green-blue wall of water beckoned. Frankly, it looked scary but having learned all there was to know about riding jetskis in the last four minutes I was undaunted and squeezed the throttle trigger even harder, lining up for takeoff and some crazy airtime.

Up we went and I recall thinking “hmm, this really is a large wave”, followed by “I notice the top of the wave has just broken, wonder what effect that will have on the pitch of this thing” as we crested the top of this water-mountain and started flying. Wow, it was awesome! I heard the motor note change as it was now free of water, and we felt like we’d carry on into orbit. I even felt like crossing the bars and sticking a celebratory leg out like I used to on BMX. And waving to the birds down below. Yeah!!!

It then became apparent to me that the horizon had changed colour. It was darker blue than usual and had no clouds. I then realised it was not sky, but water. Daughter had also spotted this change of scenery and begun a scream the sort of which only a terrified young girl can manage. Dad-quality eardrums were not meant for such abuse and I felt mine tingle before giving up and perforating like a star picket through a tyre… and don’t ask how I know about that.

My hearing was ruined a nanosecond before we hit, or rather bodyslammed into what was probably water but felt like concrete. The impact was far, far greater than anything else we’d done in the preceding four and a half minutes of jetski time and not for the first time in my life I was demonstrating experience is what you get five seconds after you need it.

My technique of using the legs as shock absorbers wasn’t as well calibrated as I thought, so my body pitched forwards onto the ski, as indeed did my two passengers. Sadly, the combined weight of the three of us was absorbed by my testicles which went from spherical to circular in one swift, vicious movement of pure pain. The agony is hard to describe but be assured I let out what would have been a scream worthy of a demented banshee from the depths of Hades. Wouldn’t even have dropped a f-bomb, I was too far gone to form actual coherent words. As it was, I never got the chance to express to the planet and the solar system what a combined 170kg of human on the balls feels like.

That’s because three bodies slamming forwards had pushed the ski’s nose down and changed my assumptions about balance. So rather than ride up the next wave, we ploughed right inside and underwater, so my open-mounted scream of agony just succeeded in ingesting about three litres of Port Phillip Bay ocean deep into my lungs. And for good measure, probably another litre via the nose. There was also a special bonus as my eyes were scalded by saltwater, as if I didn’t have enough grief already. Daughter also had me in a death grip like an impatiently hungry boa constrictor, flattening my internal organs and posing a serious threat to the structural integrity of my ribcage. Frankly I didn’t know what to do next but somehow the hands kept gripping as we turned the jetski into a jetsubmarine.

So by this time my eardrums were blown, my testicles were flattened, I was blind, my nose had been given an saltwater enema and I was drowning, all while being crushed to death by a human vice to the tune of an emergency services siren next to my earlobe. Really not the most comfortable I’ve ever been, truth be told.

It wasn’t the first time I’ve swiftly come to bitterly regret life choices scant seconds after having a crack at something more difficult than I’ve ever done (ref: a black downhill ski, stall turns against the torque prop in a Cessna, too many things to mention with cars, and a certain girl in southern Germany…the list goes on), and I’ve never even needed anyone to hold my beer first. I do this sort of stupidity sober, believe it or not.

Somehow we broke through the wall of water and emerged the other side of the other wave, having lost pretty much all speed despite my efforts on the throttle. I spouted water like a whale blowing or maybe farting, gave the jewels a quick rub, blinked away a litre or so of water so I could at least make out which which way was up, daughter relaxed her hold so my guts were able to expand back to normal size and therefore function, I ignored the searing pain from my newly eroded nasal passage and decided I didn’t need hearing anyway…then headed for the next wave while making mental notes on what to do better next time.

Why? Because adrenaline is life, and if you’re on my page you’ll understand! Anyone got a similar story, or have you not started living life yet????