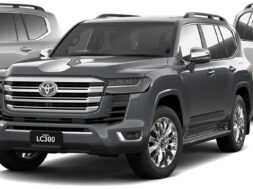 Toyota has released pricing and more specs for the LC300:

Here’s the range and pricing, exclusive of on-road costs:

All trim levels get LED headlights, Toyota Safety Sense including adaptive cruise control and AEB. There’s a 9″ display on the GX and GXL, with 12.3″ on grades above. The fuel tank is now 110L (80 main, 30 sub) compared to the 200’s 138L total. Only the GR Sport gets the swaybar-disconnect system which is E-KDSS.

Below is a table showing tare weight and payload:

Stay tuned for more LC300 news soon as I can get it….in the meantime, here’s a flashback to the LC200!