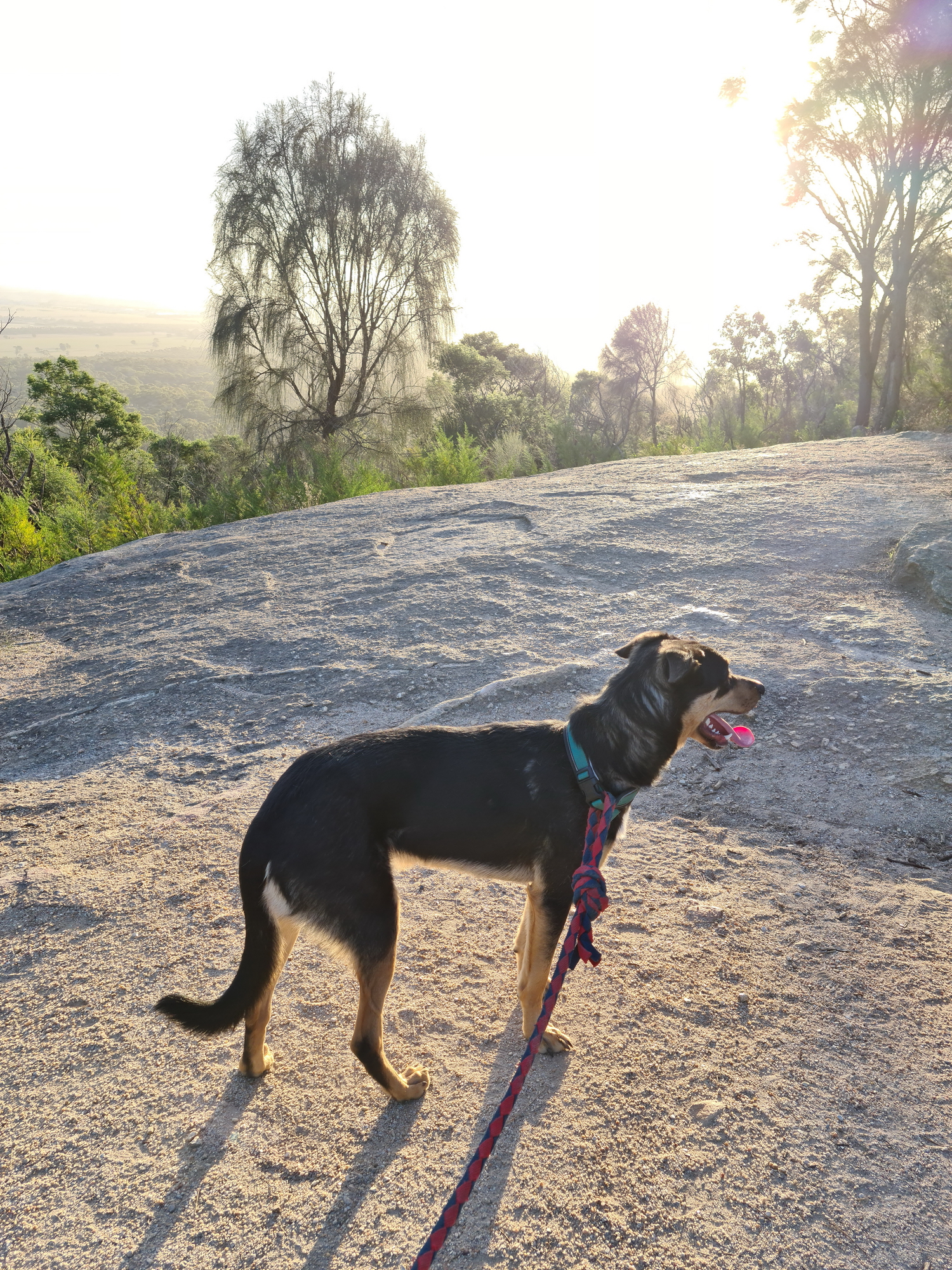 What I’ve learned about walking kelpies

So if you’ve read the first instalment you’d know that I love dogs, kelpies in particular, but I’m not going to make the significant lifestyle change for the next 15 years or so to own one. Instead, I’m a Kelpie Fun Uncle, borrowing the dogs to do my You Yangs hike. And if you haven’t read the first blog post, well now you’re up to speed.

Speaking of speed, kelpies are fast. Really fast.  When I arrive at their house they go a bit mental, sticking their noses out through the gate, whining a little, looking at me with big brown eyes, backside and tail a-wagging.  Then they sprint around the front, whimpering and bouncing,…before they’re loosed through the door like balls out of a cannon and it’s tornado time, all legs, licks and pats!  That lasts for about two seconds – which is one unit of kelpie attention time – after which they try and get into my car, not realising (or maybe caring) I have to actually open the door first.  And I thought kelpies were smart!

So last time you met Molly, and now it’s time to introduce Benny. He’s a year-old male, because it’d be kind of odd to call a girl Benny, right? He’s bigger than Molly, but despite that, more nervous and much more of a sook – we’ll get to that later.  Because I want to talk about the chihuahuas.

So there we are, Benny and I.  We’re about 2km in, and Benny is still trying to pull my arm off.  Later, as we get to the steeper parts he’ll regret wasting his energy on my bicep – I know this because the leash will go loose, and he’ll look back at me with surely-not-another-rock-ledge eyes. But he doesn’t know that yet.  And, spoiler alert, Benny being Benny, he’ll never learn.

Anyway. Back to the  story. There’s two ladies ahead, and they’re holding two bits of string for no reason.  Oh, wait, my mistake. Those bits of string are leashes, and on the end of the leashes are a microscopic dogs. Benny’s quite disinterested in other dogs, as his favourite thing is roo poop, or failing that he’ll take a decent wombat turd, he’s a real crapologist. So I’m not overly worried as we walk by on the other side of the track.
As we draw closer, war is declared.

The chihuahuas rise up on their hind legs, open their tiny jaws and issue challenges in doggish.

“WOT YOU LOOKING AT, YOU TAN AND BLACK CRAPSNIFFER!!!”

“COME OVER HERE AND LET ME RIP YOUR NOSE OFF, YOU POINTY-EARED LEGHUMPER!”

Oh My God. The sheer malevolence contained in these tiny animals.  Bouncing off their leashes. Eyes bulging. Pawing the air. Fangs bared.

If you were six inches tall, you’d be terrified. You could scale these things up and make a movie like Kong – Giant Chihuahua runs amok in a city, or maybe something like Jaws, but with the thing hiding in a forest. Now that’d be scary!

As it is, Benny gives me a confused look, asking if he’s meant to be worried or to laugh. I have no idea. I want to calm them down, as surely they’ll burst a blood vessel carrying on like that. I do wonder what the gameplan for the chihuahuas, should they let loose to wreak vengeance on poor Benny. Is their plan to get stuck in his throat and choke him to death?  Trip him up?  Make him laugh so hard he carks it?  I have no idea. All I see is half a kilogram of condensed violence at the end of a bit of string.

Now the ladies are either completely unaware of their dogs transformation into bloodthirsty micro-hounds, or they don’t care. Not a problem, we saunter on by, and Benny shows them a bit of kelpie arse as their challenges to a duel fade into the distance.

By now dusk is falling, dusking or whatever it does when it arrives and that means the roos are out and about.  I quite like the wildlife, so long as it doesn’t try and remodel my car with its body, and I spot a largish grey roo just up the path. I get my phone out for a pic, and Benny realises we’re actually going to take a break so stops, pants and looks around.

Now all dogs are descended from wolves. We don’t know how it happened exactly, but one moment the wolf was proudly roaming the wintry timber forests, and next minute there’s a pug (ugh) in a bonnet. That’s the process of domestication and then selective breeding for you – eliminate the undesirable traits such as the bit about ripping your throat out, and exaggerate the bits you do like such as the pack loyalty. In the case of the kelpie, I’d assumed that the wolf instinct of detecting prey was intact; after all, the kelpie is an outdoor, working dog. But, apparently not.
So there I am, with this roo looking at us in his roo-like way – dumb and focused – and Benny is idly wandering around at the end of the leash, looking pretty happy to have a rest, just taking stock of his surroundings. Literally no idea a ROO…yes an ACTUAL ROO, BENNY! is just a jump away. And to be honest I’m not entirely sure about the roo either; either it’s so dumb it doesn’t realise a modified wolf should be a threat to it, or it hasn’t realised Benny exists. Or it knows Benny exists and realises it could kick his troublesome arse, which it could. Anyway. I thought the whole situation was hilarious so I took this photo of Benny the Hunter and Roo the Roo.

I snap the pic, and walk on. Benny resumes pulling – lightly now – on the leash, then spots that roo. Well. Where’d HE come from!!! And of course being Benny it’s Mental Mode, which means fly at warp speed towards said roo. But I’m ready for him and he bounces off the end of his leash again, an excited blur of black and tan. Force = mass x acceleration, and right now Benny’s mass and acceleration is such that I’m not pulled over, but he’s not suitable for smaller people that would end up horizontal.

The roo turns around and lopes off to do whatever roos do, attend a workshop on how not jump fences, or which part of the car’s panelwork is best to smash yourself into.

Benny and I continue to the summit, and there’s a small metal construction with steps leading to the lookout. Molly wasn’t super keen on going up, but she placed her dainty paws in the right places, and coped okay.

Benny is Benny so sooks around a bit, so I’m about to leave him at the base but he decides it isn’t so bad and walks up, making a great performance of oh-my-god-how-hard-is-this and look-at-me-in-pain-you-MADE-me-do-this. Really a teenager, this one. So we get to the top – all 10 stairs of it, and we admire the view, Benny gets some water, and then it’s time to go down. Up I get, indicate to Benny it’s time to go – he rises to his feet in an Oscar-worthy display of suffering and patience, and takes one step down the stairs. Then lies down.

No go. Just lies there. All too hard. Defeated. Not even sorry, more a well-you-pushed-me-too-far-and-now-look sort of thing.

So I remonstrate. Tell him Molly managed it no worries. Remind him he’s a big brave Aussie working dog. That doesn’t work, so I call him a lazy bastard. But he looks mournfully at me and I can’t be angry.

But angry or not, I have a problem. This kelpie has stopped functioning. It is broke. I can’t leave him there. How do I explain that to his owner? “Sorry your kelpie broke down on stairs, do you have RACV for dogs? Needs a tow truck”.
I try more persuasion. No joy. Benny cannot move. Far too dangerous, apparently.

So there’s only one thing for it. I bend down, and pick him up.

Benny wasn’t expecting this, and struggles a bit. Let me tell you, it’s not easy to lift a year-old male kelpie who doesn’t want to cooperate. But, I’m stronger than he is, and I fold the legs in, so he’s being moved, like it or not. We get to the end of the stairs and I drop the uncooperative bugger onto the ground without any ceremony, and said bugger then acts like nothing ever happened.

Back we go, and it’s getting really dark now. We come to an open patch, and there’s several roo-shaped objects around the path. Benny doesn’t notice until one, then all of them move. He then performs an impressive trick — jumps into the air towards one roo, spots another, and somehow manages to turn, mid-air, to fly after the next. I’m impressed. Hover-Kelpie!

We return to the car, and of course Benny is unable to simply get into the car and lie down. His mission in life is to make the simple, complicated and also hairy with a bit of slobber. But that’s for another time…

Why is the Queensland government looking into engine immobiliser technology? 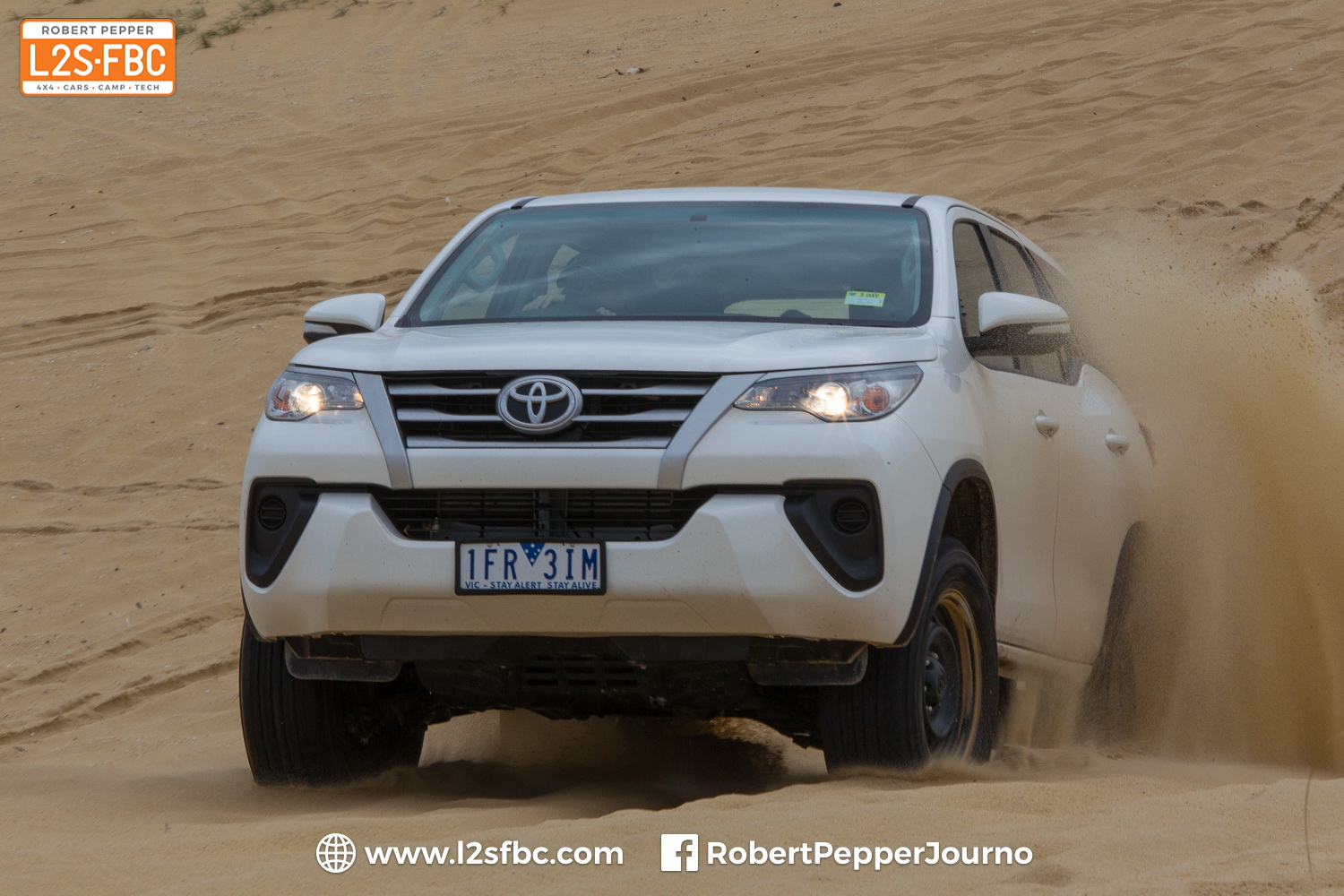