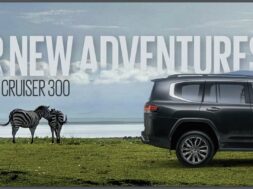 One of my readers has sent me the South Africa specs for the LC300, and there’s a few interesting nuggets of information for Australians.

There are several differential types for the LC300. All vehicles will get Toyota’s excellent brake traction control system, but in addition there is:

Obviously the best would be front and rear lockers, but in lieu of that, a rear locker, then the LSD would be preferred. That said, the LC200 never had anything other than open diffs with brake traction control, and it was superb offroad and my test of the 300 indicates it’ll be even better. So, I wouldn’t necessarily shell out a lot of extra money for any of the three options above, particuarly if aftermarket lockers appear.

Crawl Control is standard on all SA LC300s, as it is in Australia, but as with Australia, MTS (Multi Terrain Select, explained here) is not on the base model.

All LC300s are independent front, live rear, and coils. There are two options; AVS (Adaptive Variable Suspension) and E-KDSS. Both are fully explained in this part of my review. You can have AVS but no E-KDSS, but it doesn’t appear you get E-KDSS without AVS.

In a similar vein to the lockers, it’d be nice to have but arguably even less essential to onroad or offroad performance; I say this based on having tested other cars with AVS and the older KDSS system.

Interestingly, there’s no 17″ wheel option for South African LC300s, but the Australia GX runs 17s. A tyre size calculator can be found here.

The SA LC300s are rated to tow 3500kg, same as Australian LC300s, but the spec sheet gives us a GCM of 6730kg which is not information Toyota Australia has released. Happily, this is the sum of the GVM of 3230kg and the max tow of 3500kg, which is good news as it means the car can tow its max whilst at GVM.

However. Eagle-eyed readers will note the SA GVM is different to the Australian GVM; 3230kg vs 3280kg, a 50kg difference. So, let’s hope the Australian GCM is 3280+3500 or 6780kg. Towing weights are explained here, and a tow weights calculator is here.

The service interval for the diesel is 12 months / 10,000km, same as the petrol. Australian LC300s may be different, but it gives us an idea.