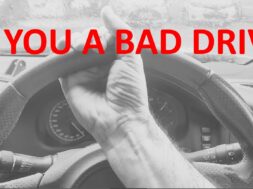 A bad driver is usually defined as ‘not me’, but in reality it might well be you…

Before anyone claims to be a good, or even a bad driver we need to define what sort of driving we’re talking about. It is entirely possible for someone to be a good racecar driver yet bad on the road, or a brilliant trailer-reverser yet terrible at being able to hold a drift.

What we’re talking about here is a good on-road driver, so here’s a few signs someone – not you of course – is a bad driver:

Bad road drivers react, not anticipate. Everyone else can see a situation happening, but the bad driver simply doesn’t notice. Finally, they do realise and have to take quick, often harsh action – like braking hard, or swerving out of the way, and often get angry about it. The skill of observation is the #1 skill any road driver needs – the earlier you see a situation, the easier it is to deal with or avoid.

Bad road drivers get angry with other people, and often use their cars to display their anger – horns, swerving, or they gesticulate from inside the car. It doesn’t matter if the bad driver is actually in the right – it’s never okay to use your car to express anger, because it often means the other driver will simply get angry too, and then what? Nothing good happens. If someone wrongs you, and it will happen, just let it slide and get on with your day. Then reflect on #3.

When was the last time you made a driving mistake? If you can’t name it, then you’re not sufficiently self-aware. Because you’re human, and you do make mistakes, even tiny ones where you just could have been better. My latest on-road mistake was moving left into a lane without giving a car coming up behind sufficient room. The fact the car was speeding isn’t an excuse – I should have given it more room, it’s not up to me to assert my right just because another driver is in the wrong.

There are some drivers who will actually crash rather than give up their right of way. I’ve seen a dashcam video! Others certainly hold their line till the last minute, then swerve with a blast of horn. Hope it makes them feel good.

A good driver will be assertive but not aggressive. If someone is forcing their way, either by intent or inattention, a good driver will anticipate that and just let them go. Good drivers are aware of, and considerate to others…bad drivers aren’t aware and don’t care. There’s no point having “I WAS RIGHT” engraved on your tombstone.

5. Harshness and lack of mechanical sympathy

Cars are complex and somewhat fragile mechanical objects. Driving with something called mechanical sympathy means using as few of the machine’s resources as possible to achieve your aim, and doing so in a way which minimises wear and tear. For example, driving gently until the car warms up, not overly slipping the clutch, being smooth and easing off for speedbumps. Not dry steering. Not crunching the nose over driveways. Selecting lower gears for prolonged downhills, even in automatics so as to save the brakes. But note that driving with mechanical sympathy doesn’t necessarily mean driving slowly.

There may be features of the car the bad driver simply doesn’t realise exists, or they misuse them. Trying to cadence-brake when there’s ABS. Not realising a park brake exists (because it’s a foot park brake not a handbrake). Always using adaptive cruise control on the minimum setting not knowing there’s a range of following distances.

Modern driving aids are there to aid, not replace. It’s important not to rely on them entirely as they all come with “may not work” warnings. For example, relying only on parking sensors when backing up; sensors don’t detect everything. Or throwing a car around a wet roundabout and relying on ESC. Or relying on blind spot monitoring for safe lane changing.

Often cars give warning signs before they truly fail. This may be a check engine light, or it may be subtle changes in driveability such as a harder-to-change gears, sluggish acceleration, looser steering, or less grip. A good driver will not only pick up these signals, they’ll do something about it. A bad driver either won’t notice, or notices and ignores, and then carries on until a real failure. And then gets angry!

Bad drivers park poorly; not within the lines, or in places that are dangerous such as intersections. As usual, they either don’t realise or don’t care.

Safe road driving doesn’t have a huge amount to do with skilled car control, but it’s possible to do things wrongly. For example, labour cars in low gears. Hook your hand through the steering wheel. Throw the car too fast into a corner and act all surprised when it tightens up and you run wide. Bad drivers often use bad techniques, and aren’t interested in improvement.

11. Doesn’t adjust for the conditions or the car

Roads conditions are not constant. Wet roads, off-camber, dust, fog, bright morning haze, crests…many factors change grip and so too should your driving change; speed, power delivery and more. Same goes for the type of car you drive; you can late-brake in small sporty car, but try that in a 4X4 and it won’t work so well. You need to row the gears in an underpowered petrol runabout, but lean on the torque in a heavy 4×4. All this is missed by the bad driver, who just continues with the same techniques no matter the car or the conditions.