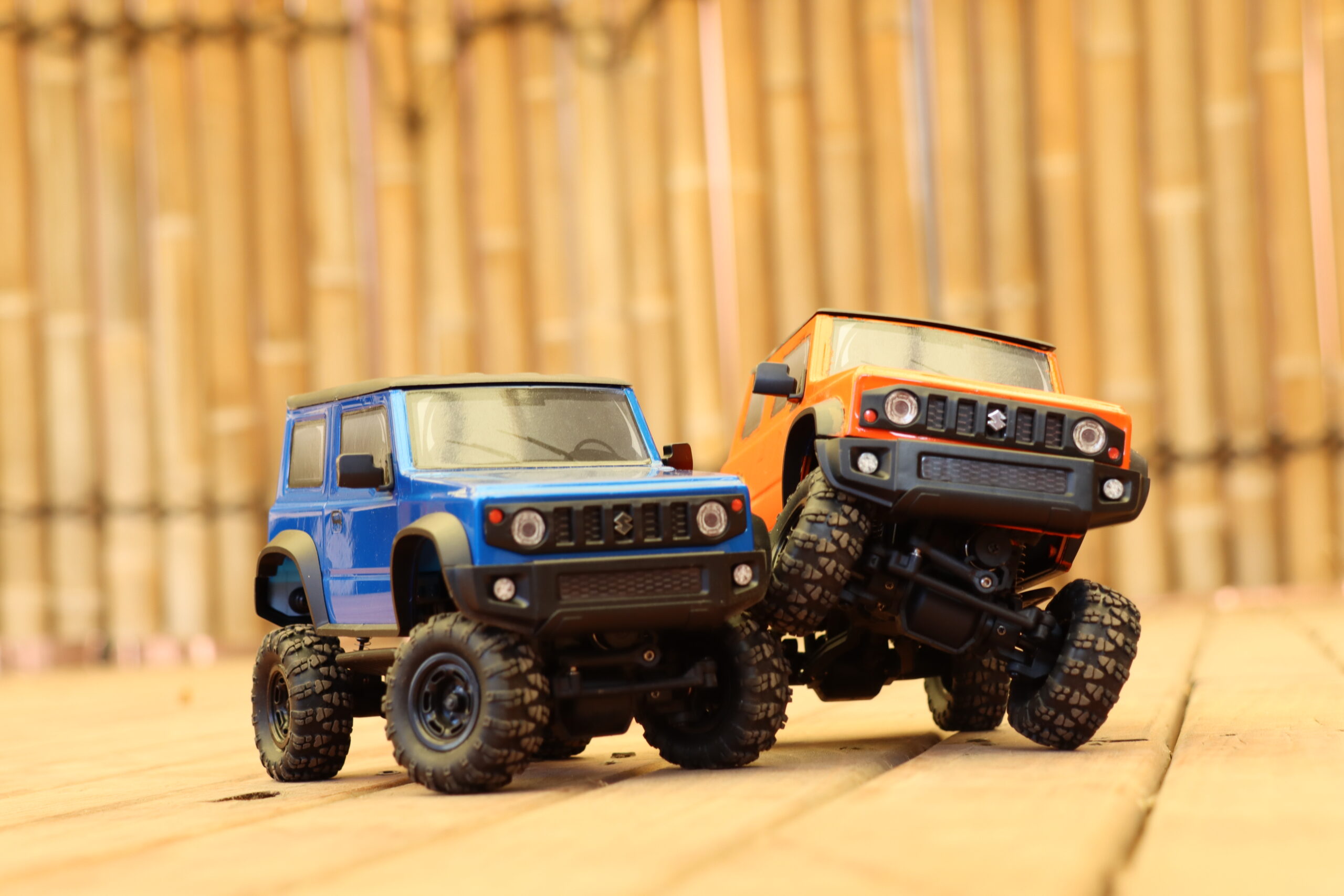 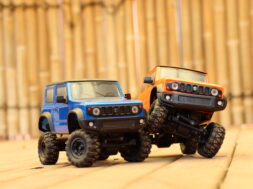 Radio controlled cars are a lot of fun…but sometimes that fun can wear off.  Personally, I find the high-speed cars a bit boring – they’re fun to see zoom off, but you can’t actually much other than a blur, and they need a lot of space.

That’s where rock crawlers come in, slower-speed 4WD models designed for rough terrain like rocks, mud and a stack of books. I own a 1/10 scale Traxxas TRX-4 which I love for its ability to lock and unlock front and rear differentials, plus two-speed transfer case.  But, it’s a bit big for inside driving, and the car plus batteries and charger will set you back the better part of $1000.

This where a 1/24 model comes in, which is a lot cheaper and small enough to be driven on a kitchen table.  I liked the look of the https://rc.kyosho.com/en/miniz4x4-jimny  Kyosho Jimny, and ordered one…but it took forever to arrive so I swapped to a pair of cheaper models – Carisma 1/24 MSA-1E Jimnys which combined cost less than the Kyosho equivalent.

Obvuously you get what you pay for, so I was a little apprehensive about the cost but coming from a reputable hobby shop I figured they wouldn’t be too bad and they certainly looked like fun – but would they live up to the “Mini Scale Adventure”  tag?

I was pleased to find that absoutely everything needed was included in the box, even down to the 4 x AA batteries for the controller. That means the Carisma is “RTR”, or “ready to run”.  My Traxxas was also billed as RTR, but required the purchase of batteries and a charger.

I found more good news with the charger for the car which just plugs into a USB port via an adapter….which means you can easily charge the model from your full-size 4X4’s USB ports.  Switching the car on and binding the controller was a bit fiddly, but that’s a one-off process.

Time for the first run on the vast white expanse of the kitchen table!  And wow…what is that? Huge, and I mean huge body roll caused by the torque of the motor. I fixed that with foam inserts to both stiffen the spring effect of the suspension and provide some damping, but I’m actually surprised Carisma shipped even a cheap car with suspension that bad.

Okay, so fun factor. I think these models are best enjoyed inside on courses like books, dinner plates and blocks of wood. And they are fun, more so when you have multiple people and two cars. There’s the car runs out of traction before power which is ideal, there’s different speed modes, throttle response is good enough for slow-speed work, and they’re robust enough to handle knocks. You’ll probably get around 30 to 60 minutes of play before a two-hour charge is needed to get the battery back to 100% – but there’s no way to tell when the car is fully charged. The batteries aren’t really designed to be replaced, but it is possible.

My two cars came in blue, but it’s more fun to have different colours so we just removed the black trim, masked the windows and rattle-sprayed it orange (of course).  Should have done a better job on the masking, but it’s not too bad.

The model’s drivetrain is 4WD, with no differentials or transfer case so there’s no opportunity to use traction aids to navigate obstacles. Most RC 4X4 crawlers are the same – my TRX-4 is a rare exception.

Overall I do recommend the MSA-1E, and I’d further suggest that you’re better off buying two of them not one higher-priced model because I think there’s way more fun to be had with two driving at the same time. You can also modify one – change the suspension for example – and directly test it against the other.

Could well be a nice little Xmas present idea!  Enjoy your scale crawling – I’m very happy with my 1/10 TRX-4 which is a sophisticated outside vehicle, but for a tabletop the pair of MSA-1Es is a great way for a group of friends to have a little friendly competition!

0
0   0
previous Can my Ford Ranger tow my caravan?
next Camping with a ute service body