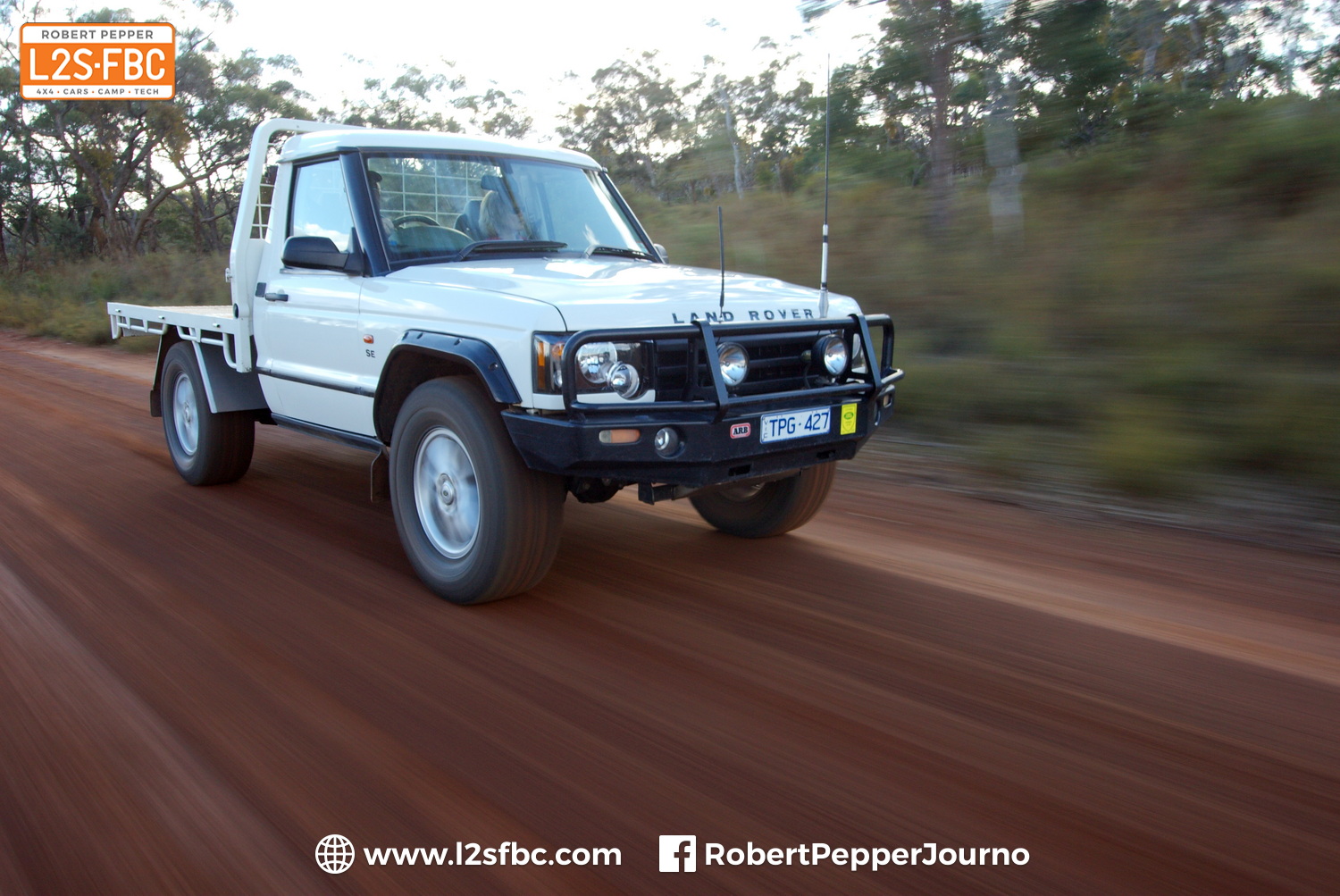 Utes have come a long way in recent years, with improved comfort, ride, handling and all-round performance. Even the bodies look new and stylish, but if you look beyond the panelwork the current crop of utes are very similar – and a long way behind the technical advancement of the wagons. Where, for example, is a constant four-wheel-drive ute? Why are rear brakes still drums? Rear leaves are simple, but we know coils can be made to carry a tonne and they’re better for ride and handling. Utes don’t measure up to wagon driveability, and load-carrying is not an excuse.

Now while there will always be — and should always be — a basic, cheap, no-nonsense ute, the fact is many buyers want a workhorse with sophistication. Someone who agrees with us on this score is mechanic turned farmer Greg Miller. So when Greg found himself minus a ute as a result of a daughter’s collision with a tree, he started to look around the market and wasn’t particularly impressed. Nothing fitted the bill, and he reckoned the new Rodeo with bullbar looked “like Dame Edna coming down the road”. In that situation, most of us fantasise about a custom 4WD, but Greg has the skills to actually make the dream come true. He’s a fan of Land Rover products, if not the company itself, so he set his heart on a Discovery ute. This would be something that would earn its keep as a farm truck yet be able to eat up the kays in comfort as a 4WD tourer. First task was to locate a suitable base, and late in 2004 Greg made a successful $18k bid at an auction for a rolled, but driveable (to the surprise of the auctioneers!) 2003 Discovery SE TD5 with 52,000km on the clock.

That would have started the project, but Greg was in two minds. “See, with a bit of repair work we could have been into a $50k wagon”. But one morning he just got up, fired up the nine-inch angle grinder and took the back off. No turning back now, and work started in earnest as the farm was still down one ute. The Discovery has a 100-inch wheelbase, and that was going to be too short. Greg thought about 110 or 130, but split the difference with a 120-incher. That necessitated extending the chassis, which is achieved by a staggered cut, fabricating the extension and some skilled welding. The stagger has to be at least 50mm, but Greg played safe with 75. Fabricating the 2440x1950mm tray relatively was easy, as was making up new mudguards and a towbar. The challenge was how to create the bodywork behind the doors, and while Greg felt he could fabricate the parts in the end he didn’t need to – by a stroke of luck a mate had bought a wrecked Mazda B1800 ute and the panels from that were a perfect match for the Discovery’s panel lines and creases.

Another challenge was preserving the Disco’s sophistication. The ute has ACE (Active Cornering Enhancements), Land Rover’s system for controlling body roll, and auto-disconnecting swaybars under 30kmph which aids articulation offroad. The rear suspension is height-adjustable airbags, there’s ABS with traction control and Hill Descent Control – you just didn’t see these options in utes at the time, and now in 2011 they’re just coming in. All of that still works, and there were some 200 wires and lines, many needing extending to cope with the extra twenty inches of chassis. The trailing arm mounts were moved back, and a longer, modified Defender tailshaft was added. The rims are standard 18-inch alloys, but look small relative to the large 35×12.5 Cooper STTs. Greg originally wanted 33s, but opted for 35s, although that meant cutting the front panels and adding Rangie flares.

Helping with the clearance is a set of Ironman 2-inch lift coils, but there’s still a little rubbing at max flex. The standard Disco tyres are 29″, so such a big difference meant the diff ratios had to be changed from to 3.54 to 4.11. The fuel tank was replaced with a 200l unit good for around 1800km of cruising range because the ute wasn’t going to be just a farm hack but a tourer as well.

As Greg likes a bit of music on the move, he moved all twelve speakers from the original car into the ute’s cabin. The whole project took ten months and around 400 hours of effort, and what’s impressive is that it’s all Greg’s own work. Like many modifiers, Greg spent a fair bit of that time carefully thinking through the options and best ways to approach a problem, sometimes leaving it for a couple of weeks before returning. An example of the forward-thinking is the neat location of the spare wheel within the chassis which has been flattened for that purpose.

All that effort has paid off with a vehicle that is a beautiful example of workmanship and capability. Greg says he’s seen mechanics from a Landie specialist come literally running to look at it, and it’s not unusual to return to the ute to find admirers. It’s easy to see why; it’s not just the unique conversion, but it’s the fact it looks so “right” and in proportion. More than one person has made the mistake of assuming it’s a Land Rover factory vehicle.

Beautiful it may be, but it’s still a workhorse that “gets no favours”, having to tow the hayrake, cart feed, carry wood and do all the usual farm chores. The first touring trek is complete too, with Greg just returned from a five week, 12,000km trip to the Katharine in the NT via the Oodnadatta Track, with the ute towing a Jayco caravan all the way there and back, all tasks the ute accomplished without missing a beat.

What Greg likes about his creation is the fact it’s the both best onroad, and best offroad 4WD he’s owned. He’s used to “Land Rovers cornering with doorhandles on the ground”, but this Disco is flat and firm through the twisties, thanks to ACE. While the tyres are large, the 18-inch rims help keep the tyre slip under control yet leave enough rubber to air down and still protect the wheel. Greg is yet another 4WDer who had decided automatics are better than manuals, and that combined with the suspension flex, traction control and Land Rover engineering mean he can get his cargo anywhere around the property at speed and in style.

I was lucky enough to be offered a drive and didn’t notice any difference from a normal Disco till the corners, where the extra wheelbase seemed to contribute to stability. Doing a three-point turn you notice the greater turning circle, but it’s a shock to turn around and see a tray through the rear window and typically excellent ute rear visibility! If he was doing the job again Greg would just make the tray floor out of wood, as the treadplate is a little thin and booms at times on the road. The only other point is that wingmirrors need extending wider than the tray, so minor issues for such a big job. The engineer who certified the vehicle asked only that a high-level brakelight be installed, and the rear worklights be E11-standard. Easy-done.

Plans for the future include a snorkel, performance chip, larger intercooler and a 3-inch exhaust, but the ute will remain a workhorse, not a toy. Greg can justify that claim, because his next project is indeed a plaything; he picked up a rolled ’04 Defender 90 for $11k with a mere 466km on the clock — that’s not even a full tank of fuel’s worth! The 90 will be converted to a ute with rollcage and barwork, and if the quality of the Discovery is any guide Greg will own another Land Rover that turns the heads and hearts of everyone who appreciates automotive engineering.

0
4   0
previous RED Winches release the Recovery Ring, a snatch ring with bearings
next Why is aftermarket gear priced differently from country to country?