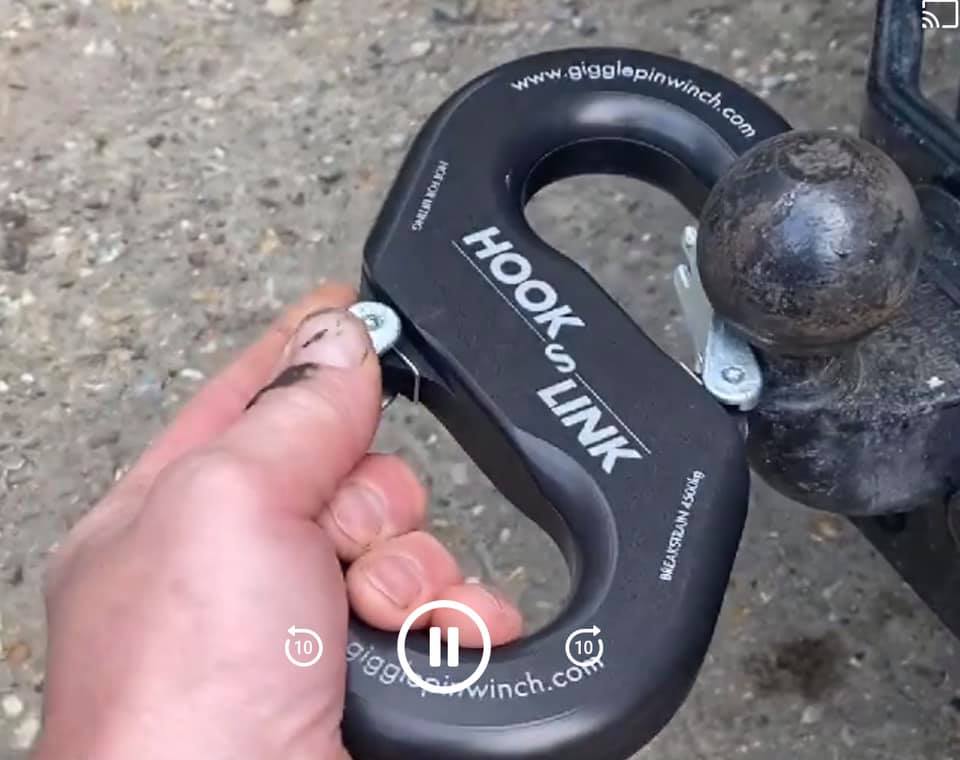 Gigglepin are a well-known and widely respected maker of 4×4 equipment, especially winches. They have released a product called the Hooklink, about which they say:

This is a broad statement, and as such, wrong. Here’s why:

The shear strength of a towball as per AS 4177 is 85kN. This would be sufficient for many 4X4 recoveries, but there’s some huge assumptions. First, there’s nothing in 4177 about how many units need to mass that test, and by what margin, so would you towball pass? Who’s to know. Then, it’s a new towball being tested…not one that’s been rusted, used for towing for decades with all the stresses that entails. And the force when tested is applied steadily, not as a snatch, and in one plane. And, that’s the towball, not the tongue which is also part of the recovery chain; often the towball is fine but the tongue isn’t. I could go on for a while about why it’s a bad idea, but you get the idea. Here’s the summary:

Note the use of the term ‘Australian’ above. The towballs in the UK and elsewhere are quite different, and certainly the UK ones are far stronger – I don’t have the UK standards document in my files so I can’t quote it. But I have a major issue with a broad statement made without nuance that leads people into unsafe practices.

Here’s the best way to create a recovery point from an Australian tow hitch (video embedded below starts at the part about hitches):

Gigglepin themselves have clarified use of the product to say:

This video is to show one of the many uses for a Hook Link. Always match your recovery kit to the job in hand, whilst some tow bars are incredibly strong like some of those in the UK and Europe, there are some in the USA and Australia for instance where this would not be a suitable application for a Hook Link. We would never recommend using a hook link for a snatch recovery. Check out this link https://fb.watch/6RDmZ0l8V_/ for more information on rigging technique advice for the Hook Link from Gigglepin.

I wonder if the HookLink has words on it saying “don’t use for a snatch, don’t use on Australian towballs”. Certainly the original post didn’t make that distinction. And the MBS (Minimum Breaking Strength) is 4500kg, not a lot for something potentially used with 9500 (4500kg) and 12,000lb winches.

It is worth watching the video above as there’s a good run-down of different recovery points, and the presenter is careful to say that the UK towballs are different to those in the USA and Australia. He also shows this:

That’s safe – it’s a rated recovery point on a Discovery 4 (LR4) which from memory is rated to GCM or similar, anyway plenty strong enough.

So why use the HookLink instead of a shackle, soft or metal? Speed, basically, and also fitment in some situations. Which in a comp is critical, in a recreational situation…no. The only situation I can think of where you’re likely to need speed recreationally is recovery off a beach with an incoming tide, and I’d suggest that saving 20 seconds on a hookup isn’t critical-path so won’t make any difference to the total recovery time. And when I’ve had to do these recoveries I haven’t needed to tow, winch or snatch anyway.

So I’d like to see this product marketed appropriately for its safe uses, because non-experts will see it and buy it, certainly not with the broad statement implying that it’s okay for any towball, and they won’t watch the well-presetned, nuanced video above or understand it fully if they did. I’d go even further, and make sure it physically doesn’t fit at least Australian towballs, if that’s possible.

Some have suggested that it could just replace a shackle, and I agree; probably lighter, just as strong, quicker to use. But, that’s not what it’s marketed or promoted as.

I’m trying to get recovery gear labelled properly, and this isn’t helping – if you think we need to change rating labels, please watch my video below and sign the petition.

MadMatt 4WD and I interviewed Jim Marsden from Gigglepin; have a watch of the webinar recording, complete with questions from the audience:

0
2   0
previous Why a prime mover and trailer isn't the same as a towcar and caravan
next What are you doing in lockdown?